Two are not enough

Our Chartreux Cattery “Mang de Meren” are my husband Marcel and I (Cornelia) and our rascals of Chartreux Collin, Ciara, Eden, Emilia and Shiva. 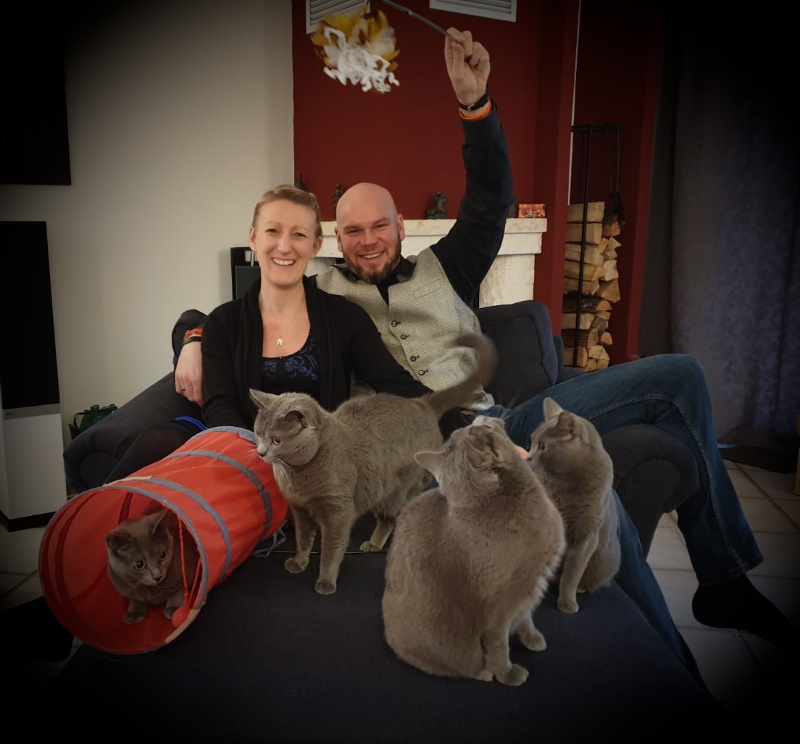 After we had made the decision at the end of 2013 to expand our togetherness with 2 Chartreux cats, the real Carthusian cats, we quickly found Karina Stelter, a passionate hobby breeder (Chartreux du Coquin bleu), who wanted to entrust us with 2 of her adorable kittens: Collin & Ciara. Visiting Karina Stelter allowed us to experience the peaceful coexistence of can openers, stud cats, cats and kittens and we were very impressed by the harmony of cats.

The first time with us

After Collin & Ciara moved into our apartment, the two immediately took everything for themselves and slept in bed with us for the first night. We were one of them! 😊

Collin and Ciara grew up to be 2 wonderful Chartreux and we got more and more enthusiastic. The longer and more intense the relationship between us can openers and our Chartreux became, the more the idea of ​​our own hobby breeding germinated in us.

First thoughts about a Chartreux Cattery

In our opinion, Collin has everything that is wonderful about the Chartreux: a muscular body, large paws, an angular head, watchful ears, dark yellow eyes and silky blue-gray fur. He is also a very loving brother and an attentive host who greets and cuddles all our guests with curiosity. We are already in love with our cat … like every cat owner. 😍

And maybe one day the Chartreux cattery will be possible …

Not yet the right time for breeding

We had a large apartment back then, but unfortunately it was not big enough for breeding, so we had to postpone the request for the time being. But then we finally moved to our house. Collin and Ciara really blossomed: they romped through the whole house, kept looking for new favorite places to laze around, checked our presence, came to us regularly to cuddle and sometimes meowed when we weren’t within range. Yes, they had encouraged us to think about hobby breeding again.

With Collin we already had a stately Chartreux stud, only two suitable female cats were missing for the beginning of the hobby breeding. After almost 1.5 years of searching, we found a wonderfully pretty girl in “Emilia aus dem Hause Grinke” from Olga Grinke. With the pretty parents, the decision was made quickly: “We’ll take Emilia!”

… Well, and Emilia’s sister Eden ?! The little one really wanted to come to us … and somehow by chance she was suddenly available too. We slept on it for one night and then it was clear: “We’ll take Eden too!” 🥰

On December 16, 2018 the time had finally come, Eden and Emilia were old enough and we were allowed to pick them up.

Since then we have been a wonderful big (cat) family in our Chartreux Cattery.

Another girl moves in

After thinking about it for a long time, we decided to take on another Chartreux girl. The search was not easy, it should be a bloodline that is not so common in (Northern) Germany. With a lot of luck, a wonderful recommendation from Mrs. Gutsche, and a lot of trust, we were able to pick up the little Shiva de la Vimeusière from the wonderful breeding of Patricia Dourin on May 5th, 2021. Shiva is a piece of gold that brings a lot of harmony into our life. ❤️

I always strive to expand my knowledge or to refresh what I know and bring it back to mind. The basic course 1 “Owning a cat” by Pawpeds gave a good overview of the basics of keeping cats. I can only recommend basic course 1 to every cat lover who is interested in keeping cats properly. 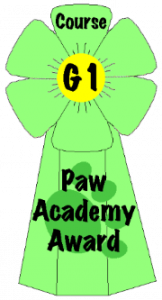 The genetics seminar for cat breeders by Raymonde Harland and Sylvie Groenveld gave me a very good insight into breeding methods, breeding programs and color genetics of cats. It was a very good support to start the hobby breed. 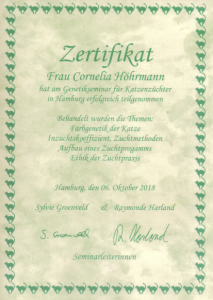 Since 01.01.2018 we (or I) have been a member of the 1. Deutscher Edelkatzenzüchter-Verband e.V. (1.DEKZV e.V. for short), which is affiliated with the Fédération Internationale Féline (FIFe for short, the international umbrella organization of cat breeding associations). 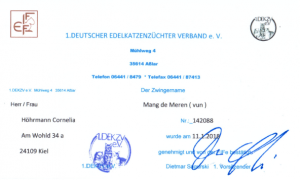 Compliance with the breeding guidelines of the 1st DEKZV or the FIFe is our top priority. We will breed according to the Chartreux standard, always with the health and welfare of cats in mind.

The harmonious coexistence between us and the cats comes first. Our cats belong to our family, live together in the household and are relaxed and well socialized contemporaries. Everything is shared here: eating, resting, playing hours and petting.

“Breeding means thinking in terms of generations, everything else is random reproduction.” (Author unknown)

This is a principle that we take very seriously for our hobby breeding.

The name of our Chartreux Cattery: “Mang de Meren”

For the breeding registration we needed a name under which the Chartreux Cattery, which should run the breed. The name is the surname of all kittens that are born here. Since we both come from Schleswig-Holstein and now feel at home in Kiel, the breed name should match this.

The idea of using the Low German language came to us after visiting our grandparents. Why not take up the connection with Schleswig-Holstein or with your own origin and choose a Low German name.

And since the High German term “Zwischen den Meeren” doesn’t sound as good as the Low German version, we had found a name:

So we are the Chartreux Cattery “Mang de Meren”.

Let yourself be inspired by our pictures, take a look at our kittens and litter plans and if you want to know more, just write to us!